Education is the key to success. That might sound like a cliché saying, but it remains an irrefutable truth. Plan International knows that, too. This international organization, founded in 1937, is active in more than 70 countries and aims to protect and enforce the rights of children. This happens over 1.2 million child sponsorships worldwide and numerous humanitarian programs. 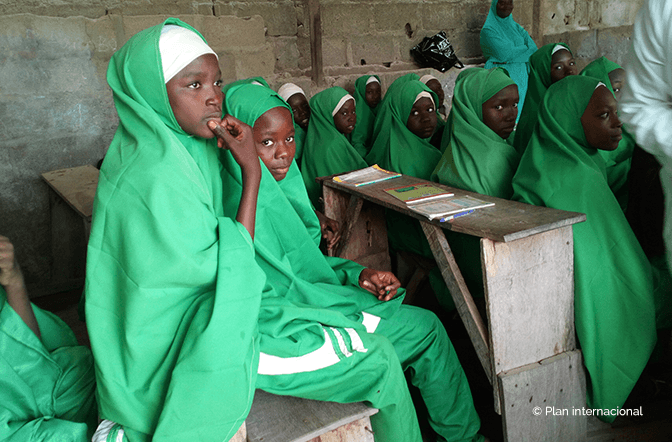 Together with dedicated Nicequest members, Plan International raised 185,000 Shells that helped children in northern Nigeria gain access to learning. The terrorist group Boko Haram has been attacking teachers and destroying schools there for years. With the funds raised, Plan International was able to set up a total of 30 provisional learning spaces in 2017, assist teachers, and provide school supplies to 306 children. It has been shown that children who have their own materials tend to stay in school for longer. School then becomes an important place for them, it’s where they receive care, protection, and empowerment while growing up. For that, Plan International sends a big thank you to all Nicequest members who donated their Shells to transform them into real help in Nigeria.

The organization places particular emphasis on supporting girls, who are often in a particularly difficult situation. In a 5-year plan from 2017 to 2022, the organization sets clear goals to help girls “Learn, Lead, Decide and Thrive”, raise their voices and stand up for their equal opportunities. Plan International also calls on communities and policymakers to end discriminatory practices and combat harmful prejudice.

One of the prominent supporters is Marcia Cross. In addition to her acting career, Marcia has been a Plan International USA supporter for the past eight years. She has given her time to film multiple public service announcements, traveled with Plan to India to personally witness the transformative power of education in the lives of girls and their families, all while also sponsoring five children. Lena Headey, also known as Queen Cersei on Game of Thrones is also a major supporter of Plan International. Lena has been a child sponsor with Plan International USA since 2010 sponsors two children in Sierra Leone. In a blog post for Plan International USA, Headey, who was expecting a baby girl, wrote that she wishes the same privileges her daughter (will) have, would extend to all girls around the world: to be loved, protected, respected, and celebrated.   Would you like to get involved as well? Visit our donations section on www.nicequest.com and stay tuned, we are in the process of setting up a new donation campaign with Plan International. Meanwhile, make sure to also have a look at our other campaigns!

Previous post 10 things you didn’t know about emojis Next post Do it yourself: Nicequest Printables to customize your house or party

SOS Children's Villages: a home for every child

Running a medical center in the Himalayas

Do you agree to the use of cookies on Nicequest?

We use cookies and similar technologies to collect information. Some are necessary to make our website work and cannot be switched off. Others are optional, third-party cookies that are used to measure, analyse and improve your experience.